THE POETRY OF COLOR

pelourinho, carnaval, the street festivals, the sea, bahia through a personal calligraphy, written awakened by the senses from an open look at human action on all things.

or would it be new york, the urban with all of its beginnings, middles and ends, the metropolis of the current world, its convergings and
divergings, the neon light, avenues, freeways, metro, subways, a city that travels on your head, the graffitti, the signature of anonymity, the importance of the gesture as a perpetuation of the passing, the eternalness of the passenger.

or, moreover, a synthesis of this journey, a fusion of a preoccupation in uniting two poles of the same course – bahia/new york – that so influenced him and still influence him as types of visions of the world filtered in his work. if new york is gestural with predominance of minimal art – herein resides his reduction of colors and means – bahia, in its turn, allows his explosion, beginning with the calligraphy and passing on to the strong colors, the emotion of penetrating into the feast ofthe people, re-creating a whole accidental graphics that celebrates existence.

new york or bahia, Sérgio Rabinovitz, one of the most important artists of his generation, shows by the explosion of his drawing, the gesture of his painting, a theme that has in man its generating nucleus – human action in its transitoriness – provocative, chromatic poems of rare beauty and contemporaneity 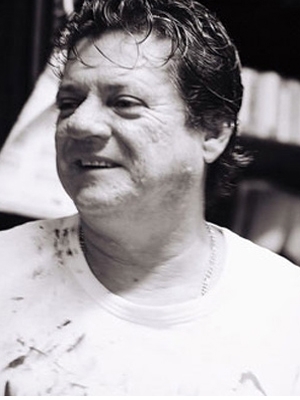